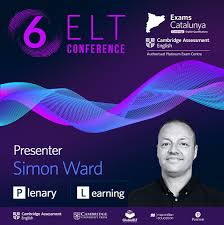 Simon Ward is a Senior Educational Psychologist in England where his specialism is positive psychology and well-being. For a number of years, Simon has been running a variety of projects to develop the attitudes, skills and experiences which allow individuals and organisations to thrive and lead to success and achievement. As a regular trainer, he has delivered seminars on a range of topics including: motivation and learning, positive behaviour management and solution oriented approaches. Simon is currently a consultant for The Cambridge Learning Journey.


Positive Psychology is the psychology of wellbeing. It promotes the ability to cope with the demands and stresses of our daily lives as learners and teachers through positive emotions and strategies such as resilience, optimism and self-efficacy.

When faced with a dangerous, stressful or alarming situation, humans tend to resort to one of three options:

Negative emotions narrow things down and limit your options, e.g. to one of the three reactions listed above. Research suggests that three positive emotions are necessary to counteract one negative on a daily basis, so positive psychology focuses on managing negative emotions and generating positive ones.

A human characteristic is the so-called negativity bias: the tendency to focus on things that are going badly. As an example, he described how he and his wife, on coming home from work, would almost be in competition to see who’d had the worst day! Apparently, positive experiences are less salient and need more work (15-20 seconds) to commit to memory than the negative equivalents.

In order to overcome the negativity bias, Simon suggested the following techniques: 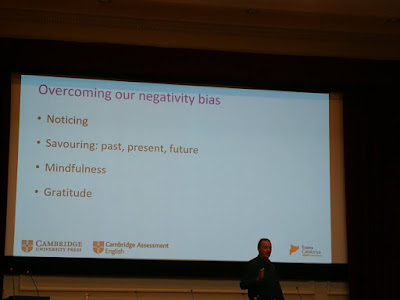 Simon works on projects and activities with secondary school children in the UK to put this into practice, but many of these suggestions could easily be adapted to suit our working contexts:


Compliment Cookies – put a message of thanks inside a cookie and deliver it to a teacher or colleague.
365 Project – members of the group take photos which are collected on a board and then vote on which one best represents them.
WOWW – Working on What Works. Notice and discuss the things that go well or right, rather than only concentrating on what wasn’t successful.
Journal – project in which schoolchildren collect examples and write a journal about things they are proud of.
Board of Thanks – In a classroom / staffroom, post notes of thanks to those peers & colleagues who have been helpful in some way.
Gratitude letter – Think of an adult who has been a positive influence on your life, write them a letter of gratitude and deliver it.

This last activity has been proven to have a positive effect on both writer and recipient. As Simon pointed out, this activity originated in the US, and as a red-blooded northern male, he’d always felt a bit uncomfortable with it. Then he heard a moving story from a previous participant in one of his workshops, who had decided to write a letter to her primary school teacher and the difference it made to her life. This reminded me very much of the footballer, Ian Wright’s story about his primary school teacher. If you haven’t seen it, you can watch it here (Warning – have tissues handy!)

Simon described Mindfulness as the experience of being in the moment, which immediately brought to mind this popular meme, currently making the rounds on social media:


Simon used the analogy of computers: if we have too many windows open at once, we will crash, and in fact, he used another dog-related image to illustrate this:


Simon concluded this section, bringing together the themes of noticing, savouring and mindfulness by means of a short vídeo, which can be seen here.


The negativity bias means that our internal voice is often negative and that we tend to be self-critical. In order to combat this, we need to develop self-efficacy: a sense of control over your environment and a belief in your ability to achieve your goals, as well as optimism and a growth mindset. 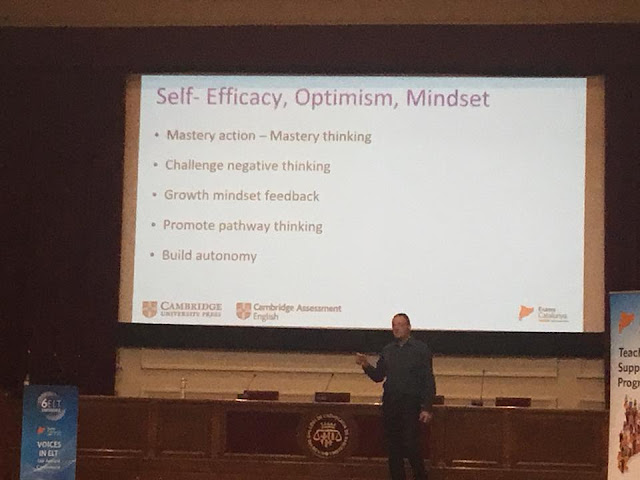 Ways to overcome the negativity bias include developing mastery action and mastery thinking. The opposite of impostor syndrome, this is the belief that we have earned our achievements. In a school context, this means not rewarding children just for turning up, but rewarding struggle, rising to a challenge and overcoming difficulties.

This optimism can lead children (and adults) to have the courage to take risks. A great deal can be learnt through vicarious learning: the ability to watch someone in action and think ‘I could do that’.

In his school projects, children are encouraged to challenge negative thinking or ANTS (Automatic Negative Thoughts) and replace them with positive thoughts or PETS (Performance Enhancing Thoughts). For younger children, these are known as PANTS (Positive and Nice Thoughts), which leads to the mantra, stamp on the ANTS and pull up your PANTS!

As teachers, we also need to extend our optimism: we tend to notice the child or student in class looking bored or disengaged, and assume it’s because of our lesson, when actually we have no idea what is going on in that person’s life to make them feel that way. As a teacher (or conference presenter!), he advises us to always search for the person who looks vaguely interested and focus on them.

Next, Simon showed us the following slide and asked us to choose which the best response would be in this situation.

Simon described this as an example of ‘growth mindset’ feedback, which develops cognitive autonomy: the feeling that you have a choice, you make the decisions and you are in control.

This refers to the feeling that you are valued and that you play a part in wider society. Whereas it had previously been assumed that human beings are born with a ‘selfish’ gene, studies such as this one  have proven that the opposite is true and we are in fact born with an altruistic gene. We are naturally designed to want to help, to contribute and to belong.

In a classroom context, students, especially younger learners, will always want attention. If we’re not enabling them with self-efficacy strategies or mastery action, they find other ways to get it. Perhaps most importantly, we should focus on establishing positive relationships with learners. 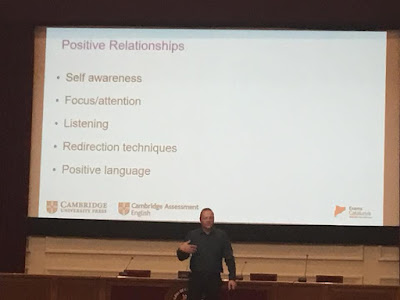 A social experiment was conducted with Joshua Bell, a famous violinist whose concerts regularly sell out the most expensive venues months in advance. Joshua was asked to play in the Washington DC subway (with his priceless Stradivarius!). The only people who paid any attention to him were children, and after a day’s work he had made a total of $52.

You can read about the experiment here The obvious point is that he was not playing in an environment that nurtured or encouraged attention. Simon’s conclusion was that it is incumbent on us as teachers to provide these environments, and by doing so, become the kind of teacher who may receive a letter of gratitude themselves one day. 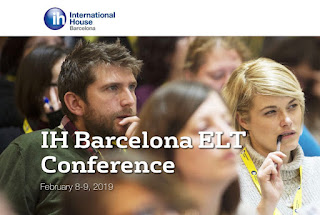 Scott Thornbury: Towards a performance-based approach to language learning 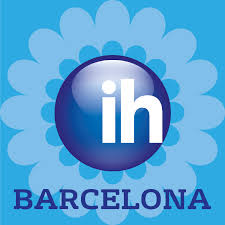